Much Ado About Nothing

Just a bit of random news and meta:

Hi folks! Didn’t mean to leave that strange sex museum pic up for so long! But Real Life has interfered some . . . you know how it goes.   Working on the “teens and piercing” post, a risks post, and a review of Kat Von D’s book.

Waiting eagerly for The Piercing Bible to be released.  Today (March 19) is the date Amazon had originally stated as the release date, but I think there’s a delay.  I’ll be sure and let you know!

Saw The Pizza Girl the other day (one medium Supreme and one medium Rustica with pepperoni!).  She said that her boss told her to remove her tunnels, which I thought were so great-looking, and put “studs” in.  People are disturbed by voids, apparently, so solid plugs would be a better alternative for her. 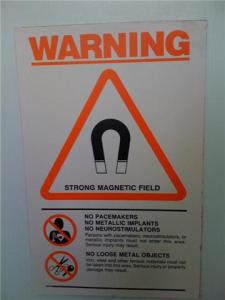 In other news, had my MRI. I arranged for a local piercer to remove all my jewelry before the test, and to reinsert it all after the test.  The chest implant turned out to be no problem at all.  I had my piercer in Albuquerque fax me the mill cert, or proof of the metal composition, showing my anchor to be implant grade titanium, and I just gave the MRI people a copy.   Despite the dire warnings posted on their doors about “no metallic implants” — they were just like, “Oh, that’s MRI compatible.”  While I lay in that scary machine, I imagined my chest anchor heating up and bursting into flames, but . . . no, it was perfectly fine.

The nice young local piercer who changed my jewelry out cleaned them all sonically and by hand (10 pieces) and sterilized the barbell for my healing nipple piercing.  Some of my jewelry was really hard to remove, too–muscle was required!

When I asked him how much he charged for this service, he mumbled something about not having a standard charge, and then tentatively said, “$10?”  I laughed and paid him $25 which was still a good deal from my point of view.  I believe in compensating piercers appropriately, and this kind of service, cleaning, changing, etc. is almost more valuable to me than performing initial piercings.  Tip your piercer well!