“Over the ages, people have squeezed, stretched, and even mutilated themselves for their cultural group.”  National Geographic’s series, “Taboo” is, I think, in it’s third season.  If you’re not familiar with it, it’s definitely worth a look.  The series covers all sorts of extreme practices including, of course, body art.  Here is National Geographic’s main page on the show, and here’s a sample:

The latest episode, “Bizarre Bodies” highlights individuals who are extreme body art collectors and artists, including a man who is having the whites of his eyeballs tattooed (pictured above), a young girl getting horns in her forehead, and the art of extreme corsetry.  I was very interested in the scenes where the newly modded people showed their family members their new art.    The young girl with the horns showed her dad, who was very disapproving.  “You just hurt yourself again.”  The guy with the eye tattoing went home to show his wife and mother-in-law, who were interested, if a bit shell-shocked.   But even though their responses varied, what struck me was the sense of accomplishment, pride, and delight shared by the modded people themselves.  It’s this feeling that I think doesn’t translate well into words, and that is a major part of body modification for a lot of people, including me.  Even when their nearest and dearest Just.Don’t.Understand. 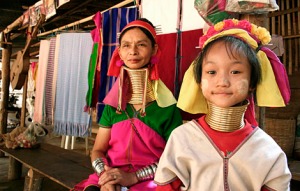 I like the show . . . and I don’t.  It’s valuable for appreciating the wide range of body modification practices world wide, like the neck rings of these Burmese tribal women, and the traditional moko (chin tattoo) of the Maori people of New Zealand.  It is valuable because it shows that widespread practices such as plastic surgery are body modification too.  However, the narration is done in a breathlessly hyperbolic style which gushes.  “And he’s doing it with [gush] no anesthetic! [heavyemphasis] but he insists he felt no discomfort at all!”  Nevertheless, it’s a very well-presented, informative series, that should be on every body art aficionado’s playlist.

This entry was posted on Monday, April 6th, 2009 at 8:54 pm and is filed under General, Tattoos & other body art. You can follow any responses to this entry through the RSS 2.0 feed. You can leave a response, or trackback from your own site.