Blame it on Barbie!

Image by Getty Images via Daylife

Body Art, Dolls, and Me

Maybe my fascination with piercing started earlier than I thought.  I had one of those original Barbie dolls. You know the ones with the black-and-white striped bathing suit?  (Yeah, they came out in 1959.  I was 3).  I swear those early Barbies had pierced ears. Barbie’s a real trend-setter all right, but Tattooed Butterfly Art Barbie was banned! Discrimination, I say!

Of course many fine dolls have pierced ears, but in terms of dolls with body modifications — pretty much all of them! I mean don’t virtually all girls eventually paint them, cut their hair, amputate a few limbs, right? (Yeah, some people actually view amputation as body art–not me, though.)

Interestingly, I find a lot of instructionals out there on how to pierce a doll’s ears, (with staples, for instance), stretch them and put in plugs, and even some on how to unpierce them, but there are people who take the concept a bit further.

One of my favorite sets of decorated dollies comes from the Tattoo Baby Doll Project. It’s a collaboration among artists and tattooists to rehabilitate those old, discarded baby dolls as a vehicle to explore the images and roles that define and empower women today.  The tattoos are embroidered on! This would be a great charity idea, I think.

Another great concept for tattooed dolls is Elizabeth Ocean’s water color paper dolls, recently featured on Needles shopping page (stay away from that page, let me tell you–it’s dangerous to your bank account!!) So exquisite . . . I had to buy two sets!

One person in Australia was making dolls called Feral Cheryl, with dreadlocks, a bindi, and navel and nose piercings.  Seems like they’ve been discontinued–too bad!  I did find one body jewelry site with a page on inflatable dolls . . . disappointingly, or fortunately, there was no actual product.

And then there are the Bratz.  I’m not really sure if there have any piercings or tattoos, but it sure looks like there might be some pierced navels under there. 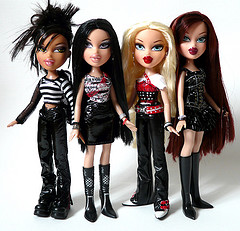 Bratz were banned recently, too–not for their appearance, although many people complained about over-sexualizing little girls, but because the idea was stolen by Mattel.  I’m sure many parents out there are happy about that.

I think I better stop now (I’m getting obsessed) but not without featuring my very own Punky.  Look, I gave her chest anchors!

Got any old dolls laying around? Now you know what to do with them.

This entry was posted on Tuesday, December 9th, 2008 at 8:14 pm and is filed under Everything Else, Tips & Tricks. You can follow any responses to this entry through the RSS 2.0 feed. You can leave a response, or trackback from your own site.

2 Responses to Blame it on Barbie!